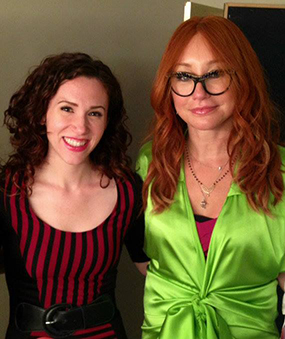 Get to know Kristen!

Downingtown, PA native Kristen Kurtis grew up on Philadelphia radio and was inspired to chase a career in broadcasting at the tender age of 13. She moved to Boston to earn a Bachelor’s degree in Audio/Radio from Emerson College, where she got her feet wet at the student-run station 88.9 WERS, and landed her first part-time on-air gig on WBOS when she was just 20 years old. After graduating in 2007, she spent three years in Washington state serving as the afternoon host on 92.9 ZZU and Music Director/mid-day host on 96.9 Spokane’s River before being named the Music Director, Assistant Program Director, and mid-day host at 93.3 KGSR in Austin, TX in 2011. She came full circle when she returned home and started her dream job hosting mornings at WXPN in October ’15.

Music has always been an integral part of Kristen’s life. She is a trained singer, can play clarinet, guitar, and piano; and has written original songs. While she hasn’t been in a band (yet), she was heavily involved in the musical theater department at Bishop Shanahan High School and has toured through Scotland, Ireland, Austria, Switzerland, and Germany with Chester County Voices Abroad. Most recently, she portrayed Amy Winehouse in The Institution Theater’s shows Rock N Roll Purgatory, Late Night Time Machine, and Jukebox Heroes. She is currently a member of the improv troupe Skeletons, Etc. and also practices stand-up & sketch comedy.

The highlight of her career has been meeting and interviewing one of her idols, Tori Amos – twice! Her other favorite artists include No Doubt, Radiohead, Fiona Apple, Jeff Buckley, Janelle Monae, and the list goes on & on. Her all-time favorite album is Abbey Road.

Other fun facts about Kristen:

• She is a life-long Flyers fan.
• While at home on break from college, she worked at the Wawa at Boot Rd & 322.
• She competitively figure skated 4th-8th grades.
• She LOVES Star Wars, and Wes Anderson is her favorite director.
• Her cat, Zuma, is named after one of Gwen Stefani’s children.