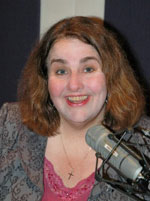 Murray the K’s Holiday Show at the Brooklyn Fox Theatre

Movies: All About Eve and The Producers. Book: A Tree Grows in Brooklyn (P.S.)

Musician You Were Most Excited to Meet

How You Got Into Radio

I started volunteering at WBAI in New Yorkthe day of the Three Mile Island accident.

Weirdest Boss t
The guy at WNYC whose walking off the kids' show sparked my career in kids' radio.

Three Things You Don't Know About Me:

Currently enrolled in the University of Pennsylvania. If I live to be 90, I might get enough credits to get my BA.